The Golden Globe nominee has spent four decades being “choosy,” from the thrill of Catwoman to the unexpected shake-up of “Married to the Mob.” As she tells IndieWire, her latest role exemplifies that adventurous bent. 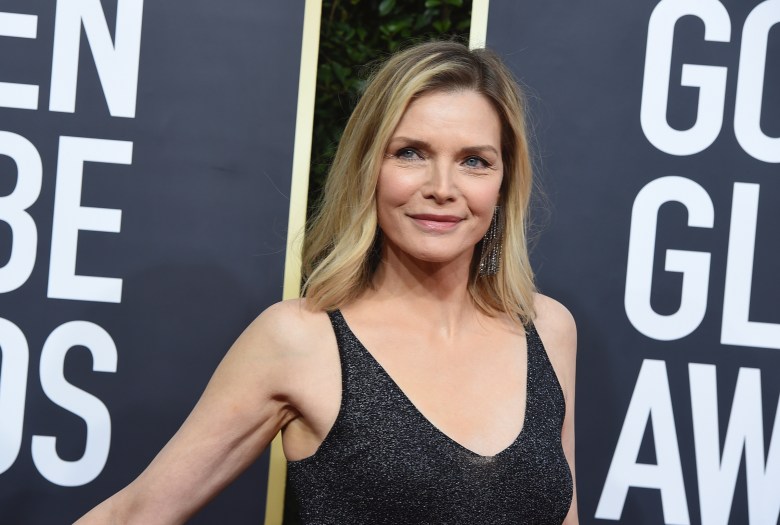 Actors like to reduce questions about their motives to simple clichés — they like to do different things, mixing things up is what gives them energy, that sort of thing — but it sounds different when Michelle Pfeiffer says it. Her latest role, leading Azazel Jacobs’ heightened dramedy “French Exit,” is the product of such desires. It’s paid off, too, with the Patrick DeWitt adaptation earning Pfeiffer her eighth Golden Globe nomination and even launching her back into the Oscars conversation along the way.

“I’m always looking for something that just excites me, and this material did,” the actress said in a recent interview with IndieWire. “It was so unusual. I’d never read anything like it.”

No, really: That’s not just fussy performer talk. “French Exit” truly is a different role for Pfeiffer, the kind of spiky comedy of bad manners she’s never dipped into before. And that shock of the new seems to be the ongoing secret to her success. In four decades of performances, Pfeiffer has rarely repeated herself. Her career is defined by its eclecticism, from superhero stuff to period dramas, rom-coms to unlikely sequels, thrillers and Disney remakes, dark dramas and musical reboots. Three Oscar nominations and general critical adoration prove that the approach has paid off, even when she slowed things down.

In the early aughts, Pfeiffer put her career on pause to spend more time with her children and TV impresario husband David E. Kelley, but she never officially left the business. In recent years, her professional output has ramped back up, from her shocking turn in Darren Aronofsky’s “mother!” to a role in the multi-billion-dollar Marvel Cinematic Universe. Pfeiffer said every choice has emerged from a deep consideration.

“I think I’ve always been kind of choosy, even when I had no business being choosy,” she said. “I’m not sure why I have that arrogance, but I think there was definitely a shift at a time when I could afford to be choosy.” That moment, she added, arrived a little over 30 years ago, “after ‘Married to the Mob’ and ‘Witches of Eastwick.’”

Pfeiffer’s affection for the late director Jonathan Demme is readily apparent. Over the course of a 30-minute chat, she mentions both Demme, who passed away in 2017, and their 1988 crime comedy “Married to the Mob” a half dozen times. The film scored Pfeiffer her first Golden Globe nomination (that same year, she also earned her first Oscar nod, for her work in “Dangerous Liaisons”); the experience still looms large in her mind. 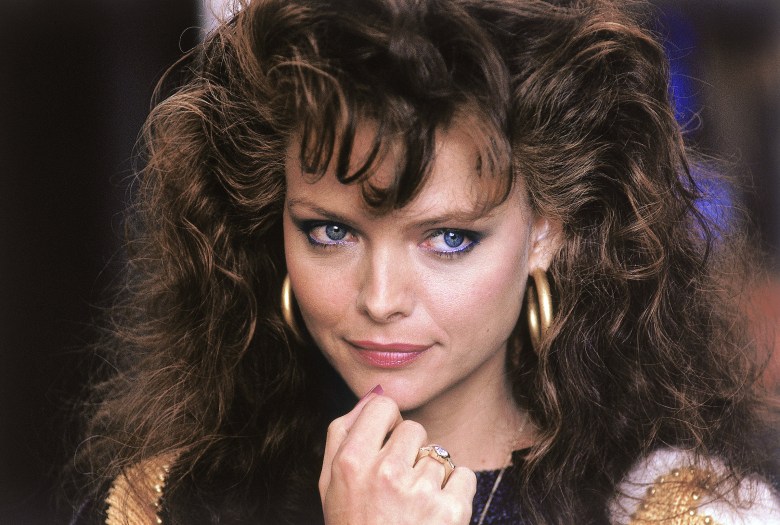 “Married to the Mob”

“There was nothing in my body of work that would have shown him I could do this part,” Pfeiffer said. “And he, for some reason — I don’t know if the studio strong-armed him into casting me — but he trusted that I could do it. I just slipped right into that character. I just felt like I really belonged there, and I had so much fun. That was the part where it really confused people. Then they didn’t quite know where to pigeonhole me, and I think that really shook it up.”

That’s always been intentional, Pfeiffer said, and often led to her making choices that might have flummoxed other people. “I always felt this need to play a variety of different types of characters,” she said. “I remember early on when — again, I had no business being choosy about anything — I would, within the limited options that I had at the time, always go for something different,” she said. Pfeiffer recalled taking on a role in the 1981 TV movie “The Children Nobody Wanted” — “nobody necessarily saw it,” she admitted — because it allowed her the “opportunity to show a different color.”

“French Exit” does that just as well, with Pfeiffer starring in the dark comedy as the disgraced doyenne of a Manhattan clan that no longer has either money or the cachet that comes with it. Jacobs’ film opens with Frances at loose ends, and things only get wilder from there. With nothing but a single stack of cash to her name, she yanks her son out of boarding school, skips town, and takes up residence in a friend’s bare bones Paris apartment. While the material sounds dark — Frances is basically living out her final days, convinced she has to end it all when the cash runs out — “French Exit” is funny, farcical, and often downright amusing, in large part due to its zany protagonist.

“I had never met a woman like Frances,” Pfeiffer said. “It was very seductive, her take-no-prisoners attitude, her insistence on being 100 percent totally herself at all times, without compromise, without apology. I personally spend so much of my life and my time trying to be polite, not hurting people’s feelings, and really going out of my way, and it can be exhausting. It was very liberating to be able to step into her shoes for a time and see how that felt.”

Pfeiffer enjoyed the unpredictable tone of the film, the mixing of “humor and silliness and melancholy and drama,” along with a strong supporting cast that includes Lucas Hedges, Danielle Macdonald, Indie Spirit nominee Valerie Mahaffey, and Tracy Letts. The latter voices a cat who is possessed by Frances’ dead husband — and even then, Frances remains the star of the show. You can’t take your eyes off of her. 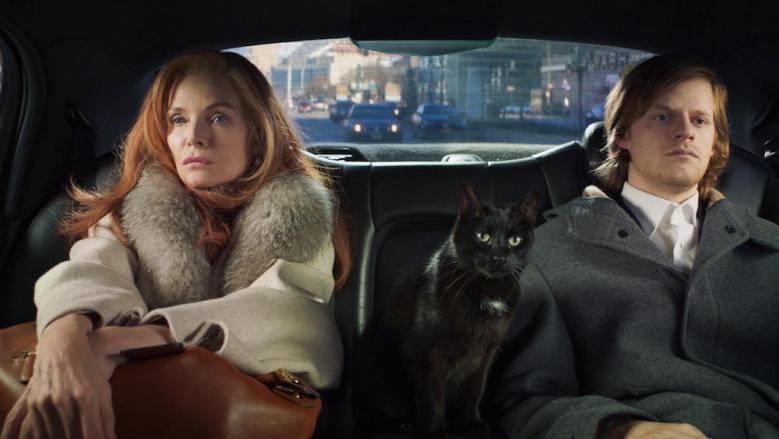 “She’s like watching a trainwreck, and you’re kind of waiting for the crash to come,” Pfeiffer said. “You know it’s coming. Because typically, with this kind of personality, that is the end result. It’s sort of what’s appalling and also so compelling about her.”

Pfieffer said she tends to let go of her characters once the shooting stops so can “just be totally present again.” But there are some exceptions to that rule. She will talk endlessly of her affection for Susie Diamond from “The Fabulous Baker Boys” and Angela DeMonaco from “Married to the Mob” — but nothing has stayed with her more than Selina Kyle, aka Catwoman, from 1992’s “Batman Returns.”

Funnily enough, Pfeiffer’s Catwoman — long considered the gold standard cinematic version of the Bat-verse baddie — is enjoying something of a renaissance, thanks to a recently recirculated clip shared by Netflix social media manager Jarett Wieselman that showed off Pfeiffer’s skills whipping the heads off four mannequins in just one take. No one is more delighted by that than Pfeiffer.

“I did see that! It’s so crazy. I mean, it’s so nuts, right?,” she said with a laugh. “It really is like this character has nine lives. It just keeps kind of coming back. … I mean, I haven’t seen everything. I’m not on Twitter. My publicist sent it to me and said, ‘Oh, look what’s happening.’” 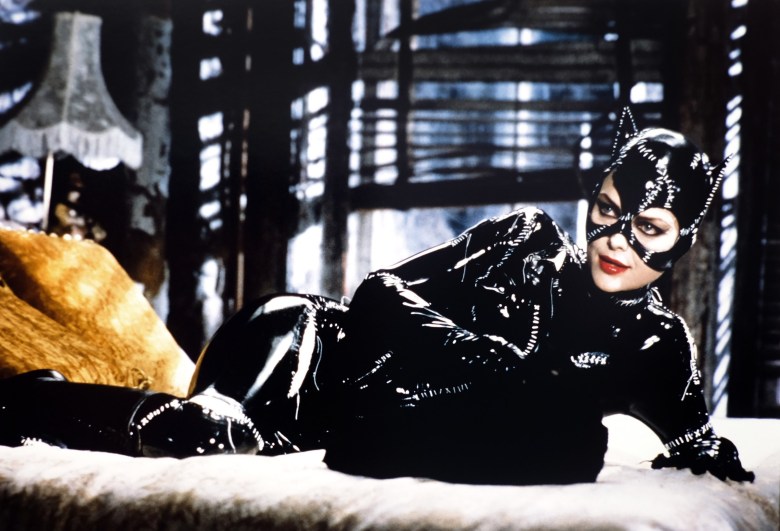 She has fond memories of the scene in question. “It was fun, just because I love playing that character, and I got really good at that whip, and I was very pleased with myself, because it was something that my stuntwoman actually couldn’t do that I could do,” she said. “I worked really hard on it, but it was a lot of rehearsal and getting the timing right, and all of that. I especially liked the jump roping at the end. I had forgotten about that!”

Pfeiffer returned to the superhero milieu in 2018 by co-starring in Peyton Reed’s “Ant-Man and the Wasp” as the original Wasp, mother of Evangeline Lilly’s new spin on the buzzy heroine, and a S.H.I.E.L.D. agent long presumed lost in the Quantum Realm. It was, she said, an easy ask, if another unexpected one.

“I loved the first ‘Ant-Man,’” she said. “The tone of it was so unusual, so unexpected, for one of these kinds of films. It was just really smart and really funny. They’re fun, they’re challenging. Sometimes you’re on the set and you’re in front of the green screen and you’re in this suit, you can’t move in and you’re acting to nothing, and you’re kind of like, ‘Why am I doing this? What is this?’ But at the end of the day, it’s a lot of fun.”

Pfeiffer’s diverse portfolio shows no signs of letting up: Her upcoming projects include another “Ant-Man” movie, an upcoming turn as Betty Ford in Showtime’s “The First Lady,” and a starring role in the new thriller from Gideon Raff, the creator of the Israeli show that formed the basis of “Homeland.”

She remains open to a wide range of possibilities. “What gets me the most excited about a project is the degree to which I’m excited about stepping into the shoes of this character, and there’s something really challenging or interesting there for me to explore,” she said. “I guess I like the world of make-believe.”

A Sony Pictures Classics release, “French Exit” is in select theaters now, with a nationwide expansion to follow on April 2.